Phil Miller was instrumental in forming our club. I was one of the first to “answer the call” to the advertisement he placed in the Fort Bragg Advocate in 2001. Phil was president from 2001 onward till Chuck Whitlock took over. (Marvin Schenk was president for a period when Phil was very ill.) When Club Members pass on we try to honour them by creating a diorama on the layout or a loco with their name on it. In Phil’s case Chuck created the Phil Miller Lumber Company office diorama. 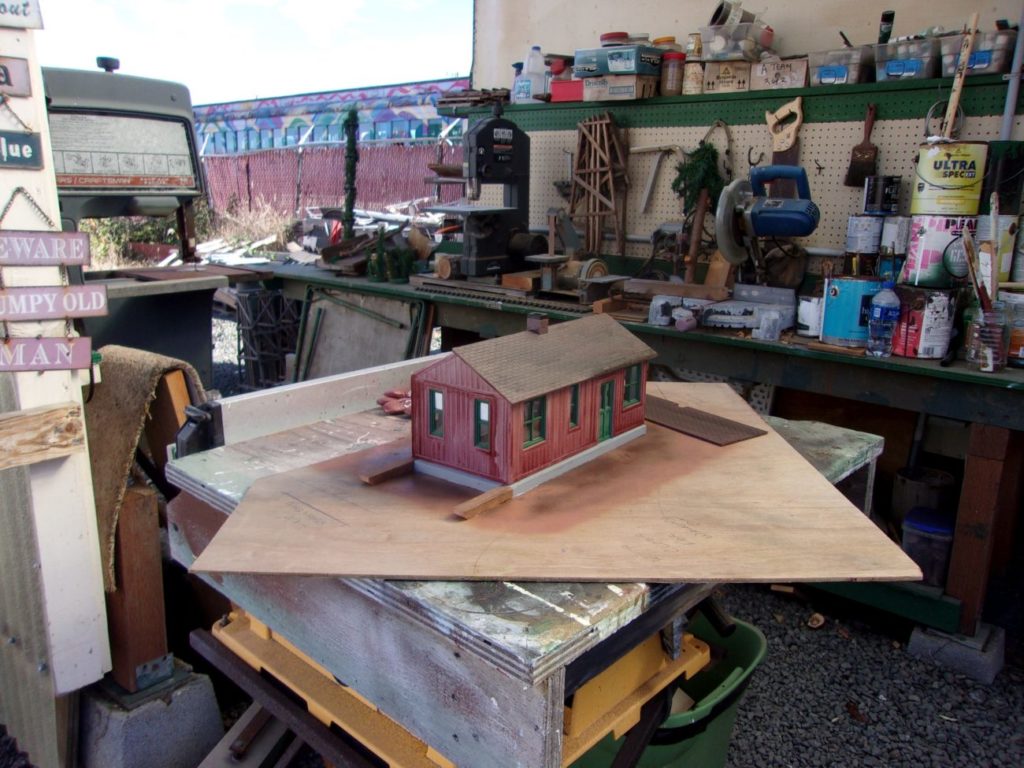 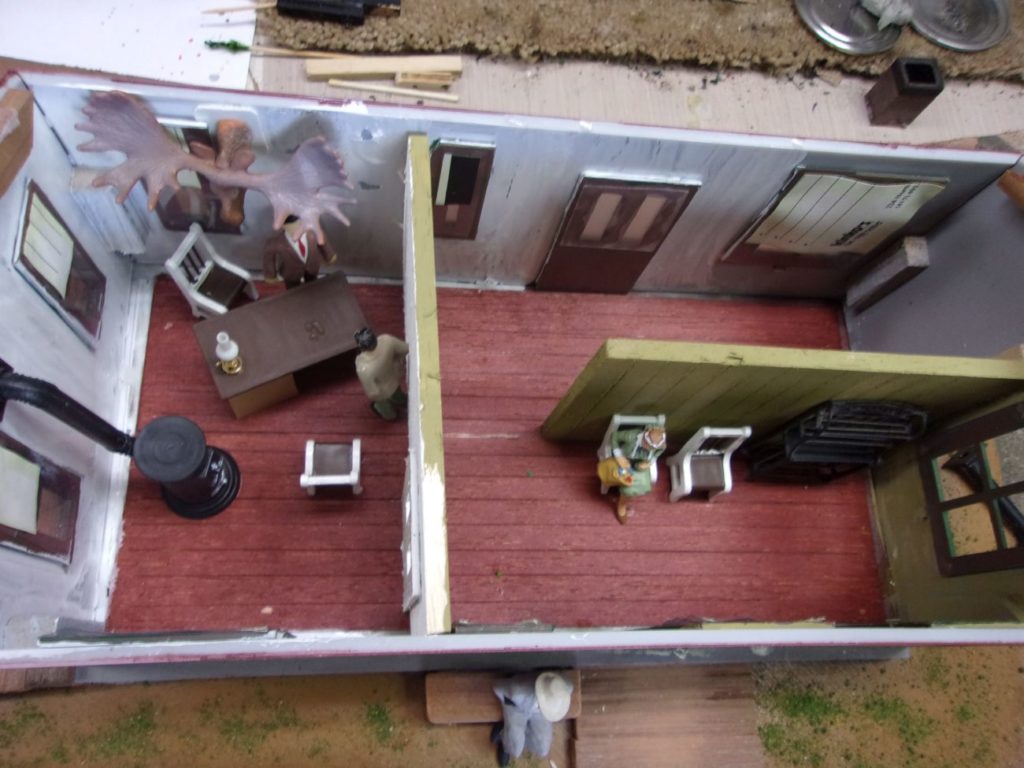 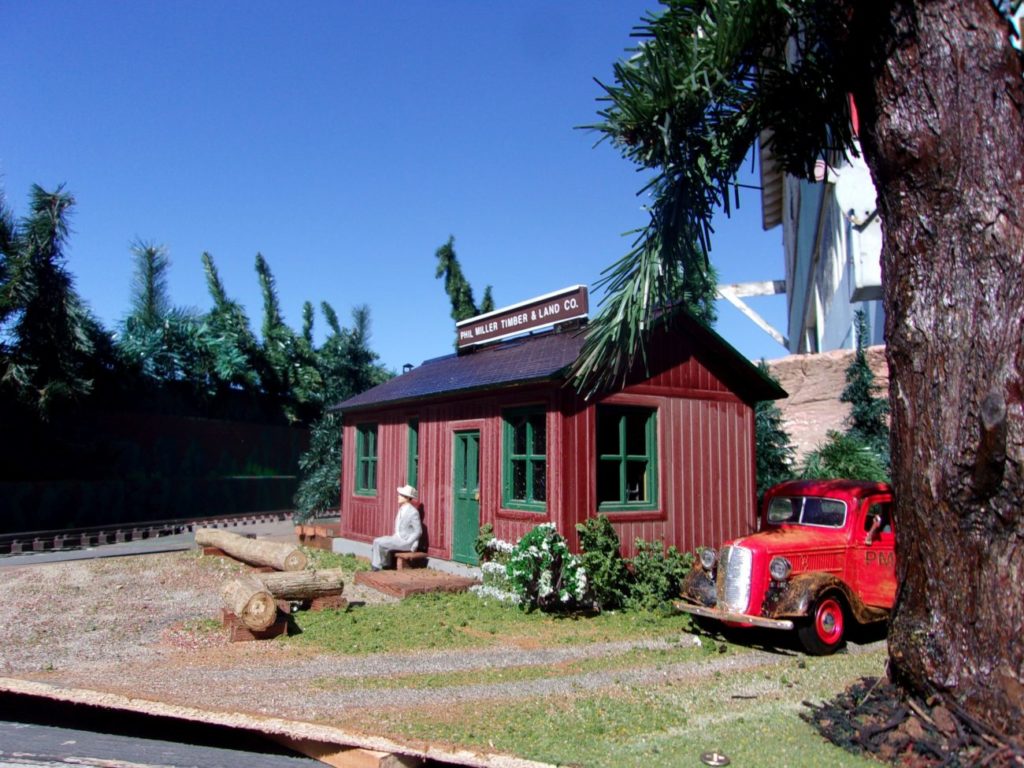 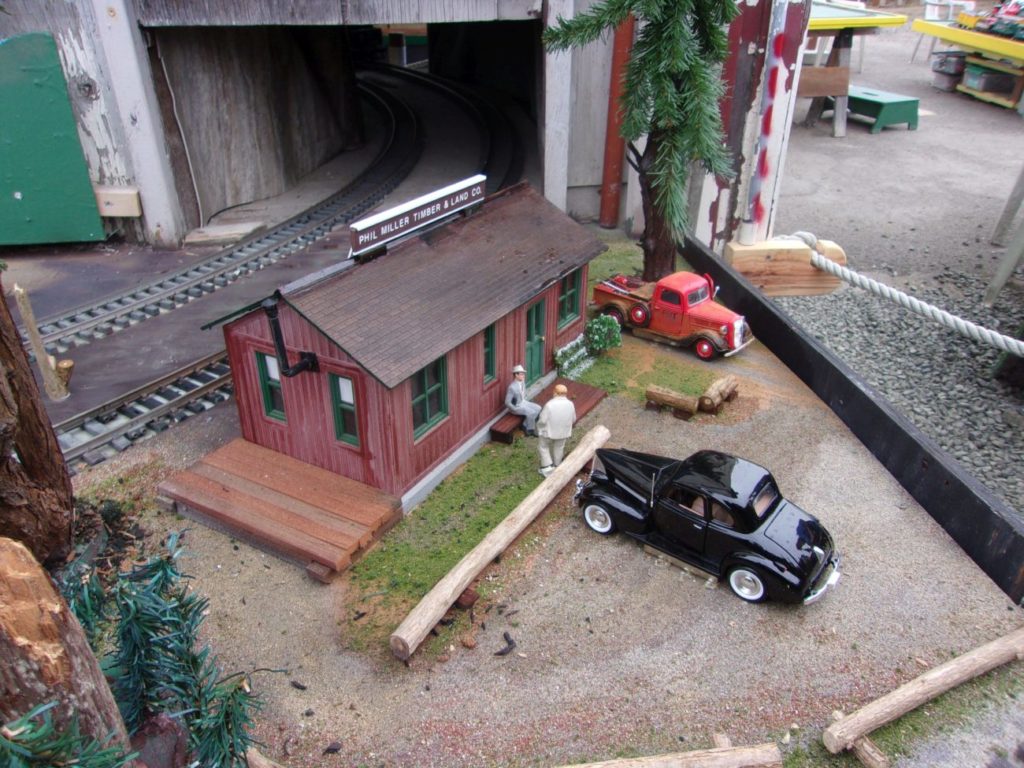 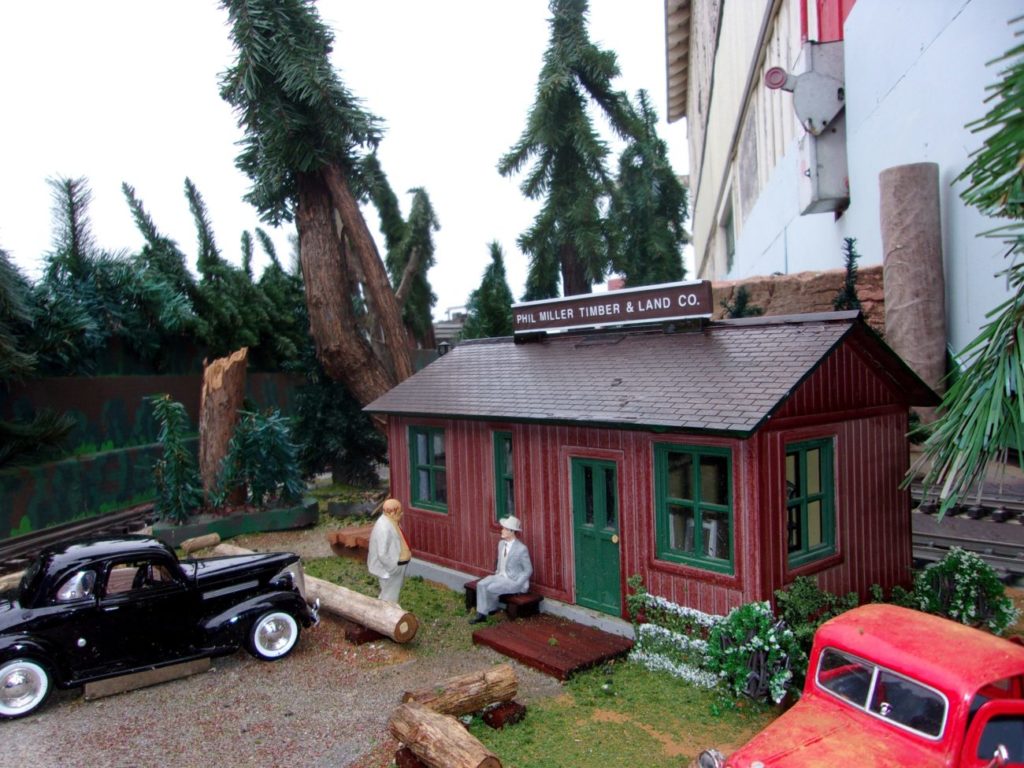 A repetitious comment from visitors is, “I love the detail.” Thanks in large part to the inexhaustible patience of Club Member Frank Davis there is an ever changing “guard” of mini-scenes. I “work the crowd” a lot and every morning when I take up my normal position at the north inside end of the layout I make sure I take a GOOD look to see what has changed or moved.

This picture came about because a grandma came in with her granddaughter and grandson. The boy spent the entire time he was there following trains. The little girl was too short to see the “action” on the Fort Bragg depot. The grandma picked up the little girl and the little girl began naming all the people. With grandma’s help she named quite a slew of “characters.” Grandma, after a while, told her she was too heavy and she would have to return to the floor. This did NOT go over well. So, I asked Grandma if I could lift her up – no prob says Grandma. I spent the next fifteen minutes racking my brains for names. When I used a name that had already been used I was met with, “Don’t be silly – that’s Jack over there!!!” It wasn’t till all the figures had names would she go back to Grandma.

Grandma’s parting comment was, “I don’t know whether we have done the right thing – I am going to hear all about the people on the Depot all the way home.” 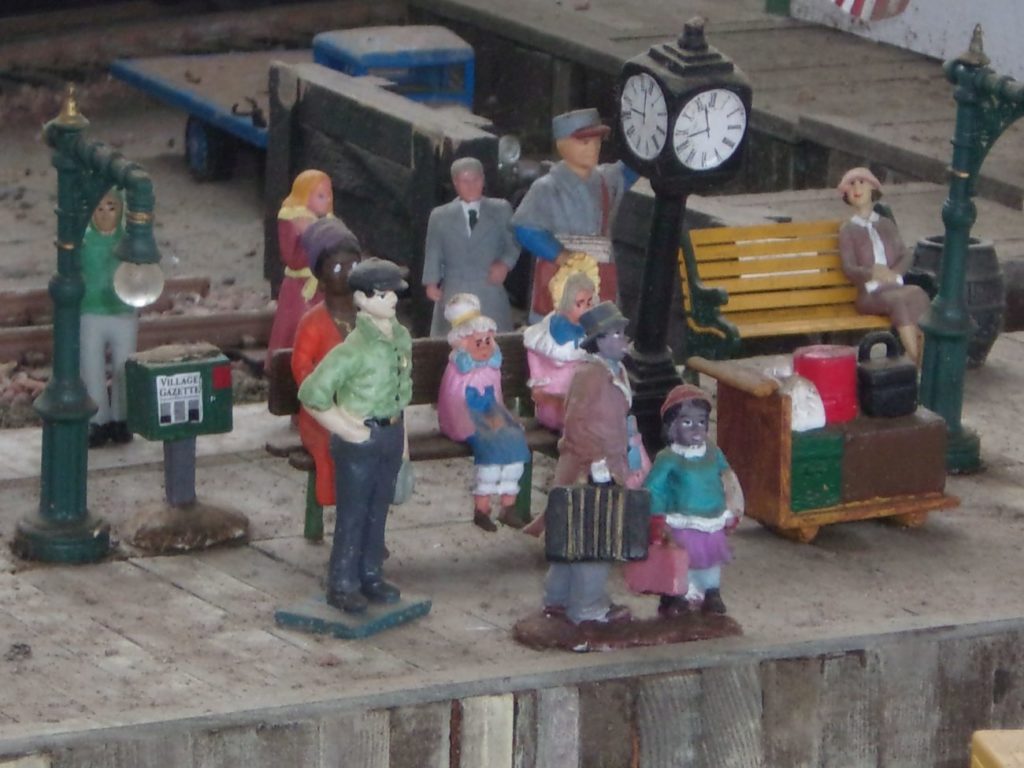 People on the platform of the Fort Bragg Depot

If Frank Davis or Chuck Whitlock are around visitors can get a demo of how a steam donkey was used to load logs onto flat cars to be taken to the Mill. My photography is hit and miss. For every five pics I take two are “good” with a bit of luck. These are two shots of the “action” in the loading area out of a bunch of failures. Hope they give you an idea of the detail that Chuck and Frank have put into this diorama. 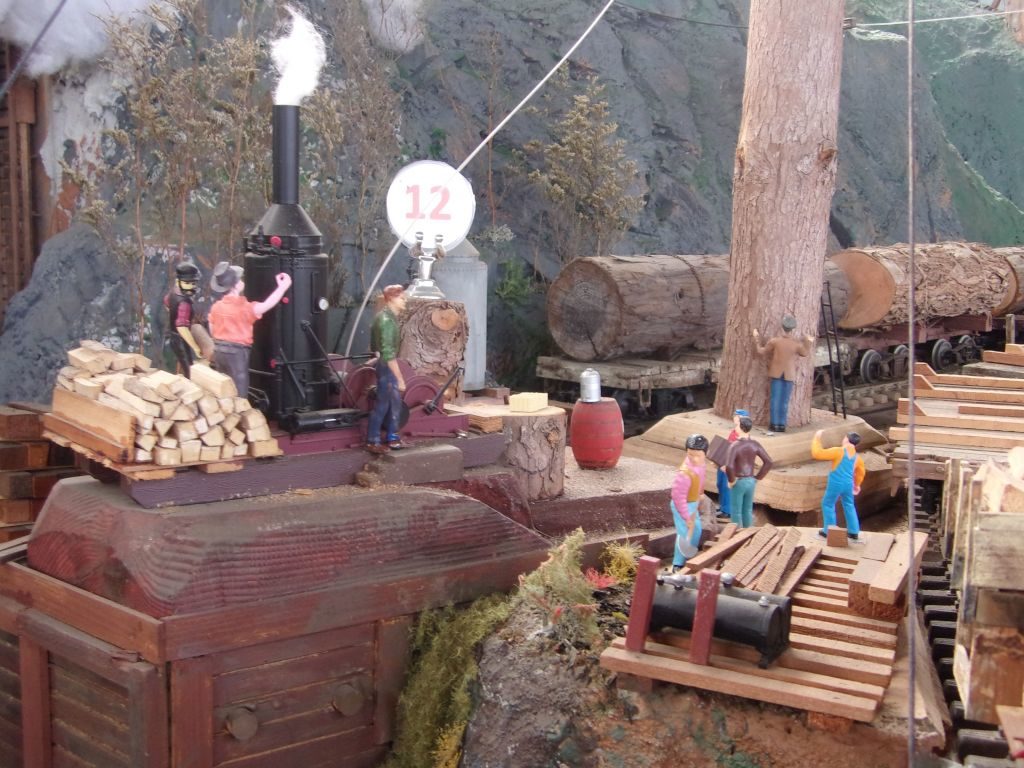 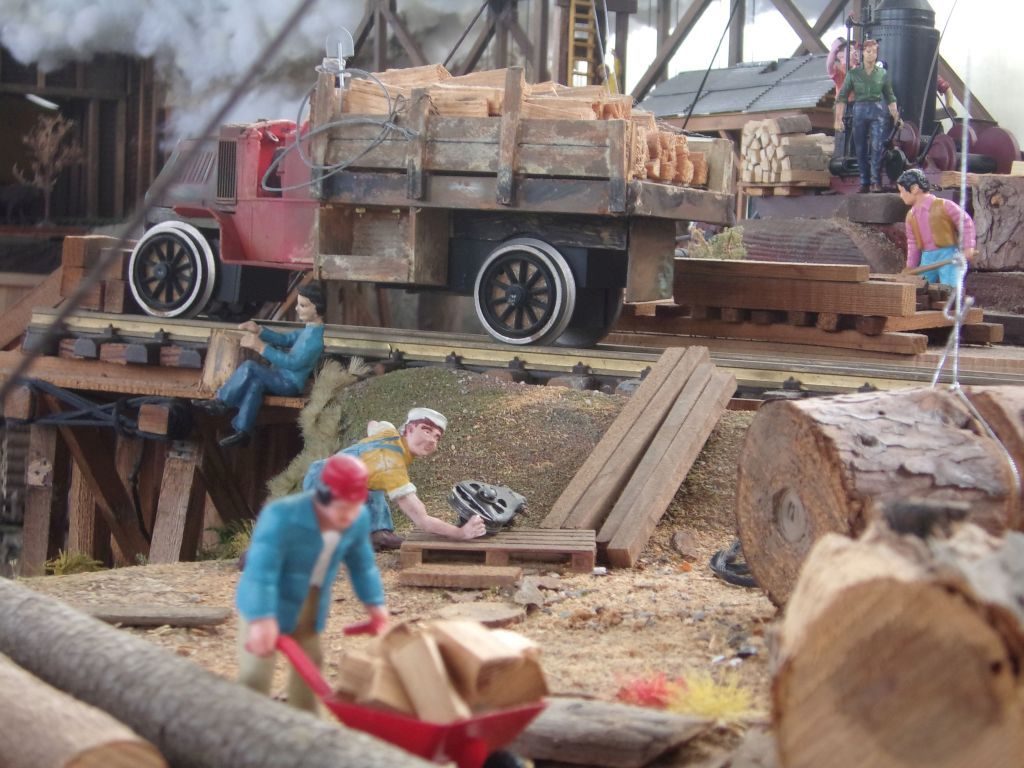 Railtruck full of wood to fire the steam donkeys

The railtruck is powered and runs beautifully.

Presdident Chuck Whitlock bought several chain driven Federal trucks as kits and already built. They have now found their way onto the layout: 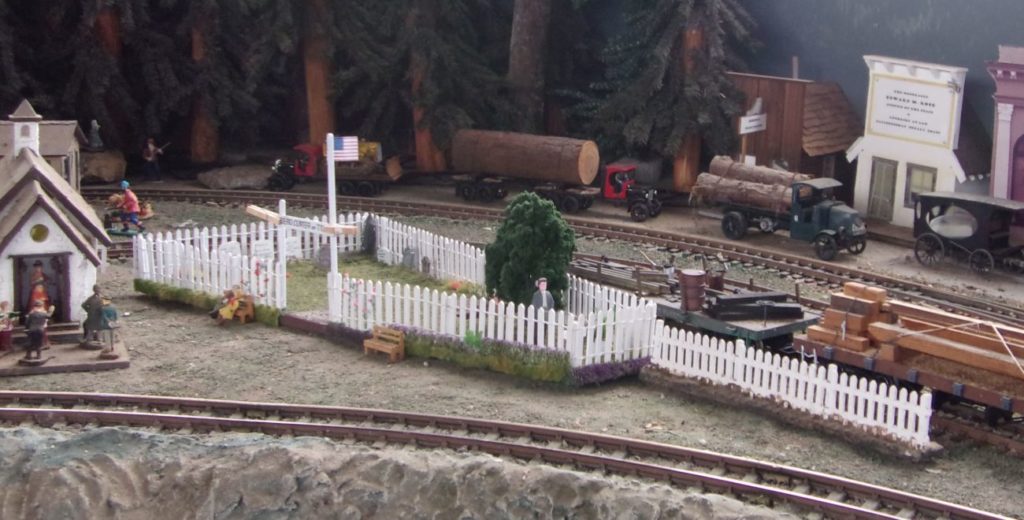 Boomer Jack was a real live dog who had no home or master. He roamed the rails mostly between Willis and Eureka. Quite a while back I wrote up his story from the “facts” that I learned. We give the story away and my best estimate is that we have passed out some 500 copies to date. 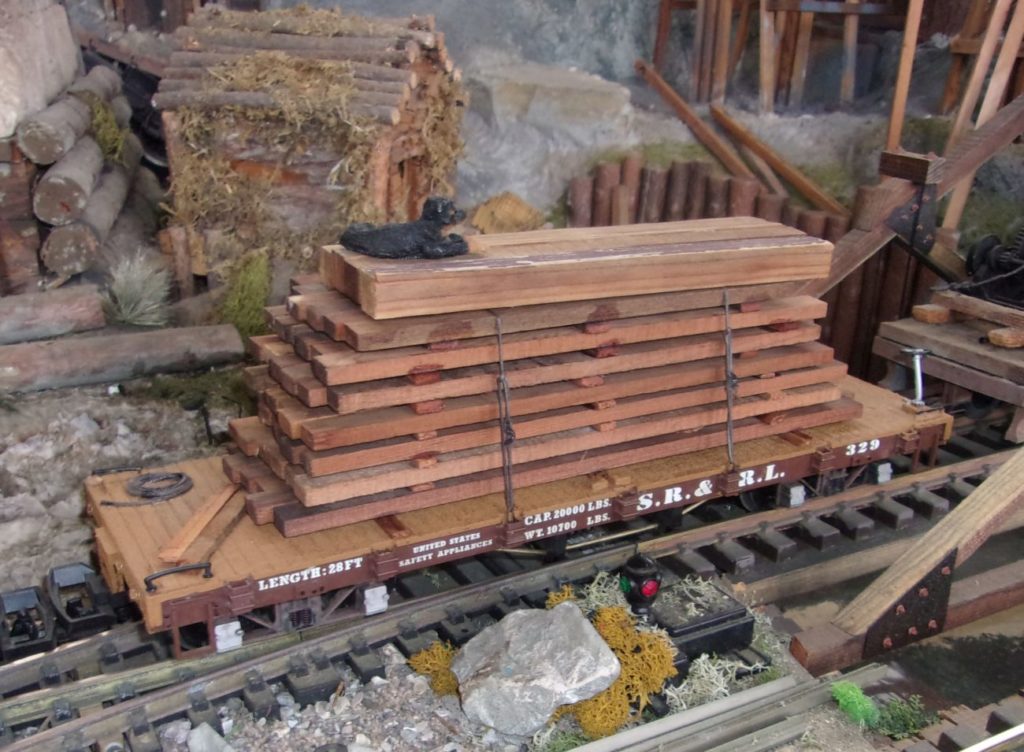 The scenery at our layout is NOT static. We constantly are moving things around, adding new stuff and tarting up old. The Homestead diorama is a recent addition. That doesn’t mean that it is cooked never to be touched. Here are two recent changesThe two pics show a crane on a flat car added to the front siding. Chuck Whitlock built it from “bits.” The second pic shows the 0-4-0 loco that has turned up to move the crane car. 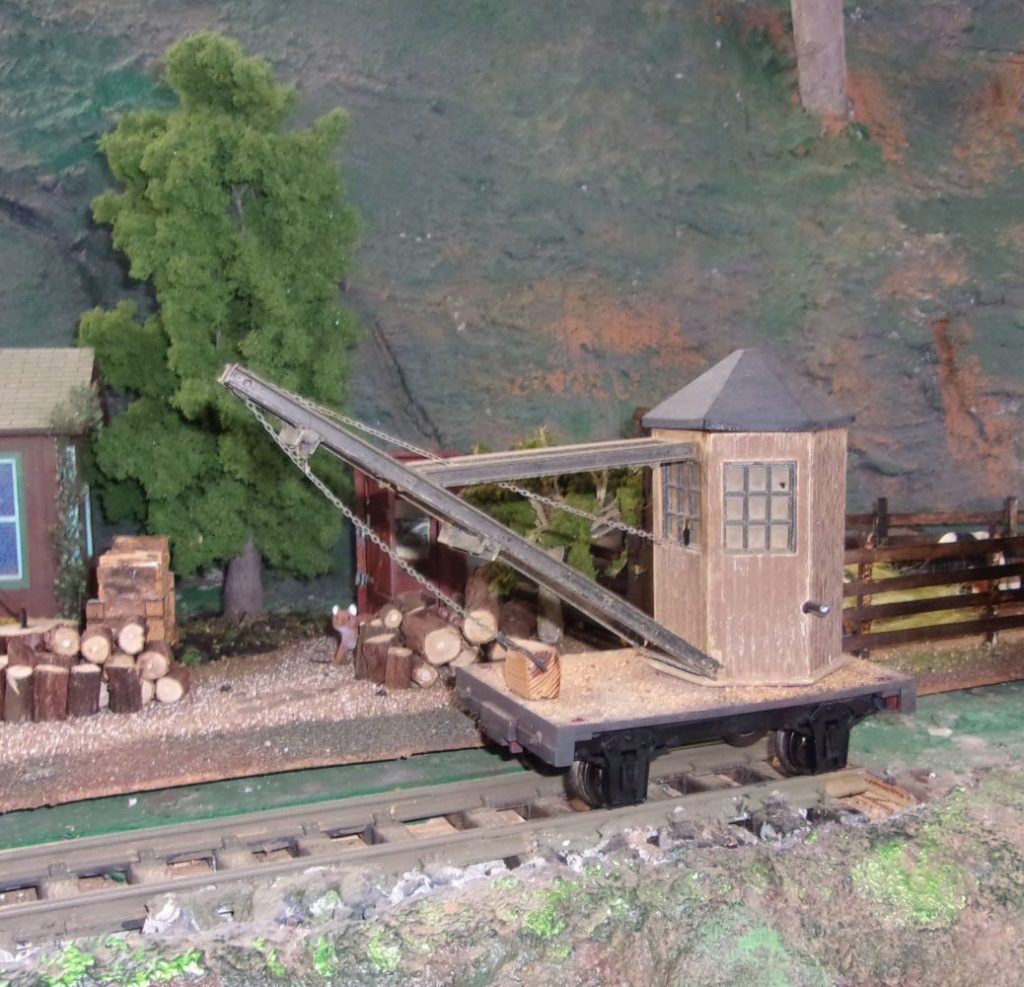 Crane on a four wheel flatcar 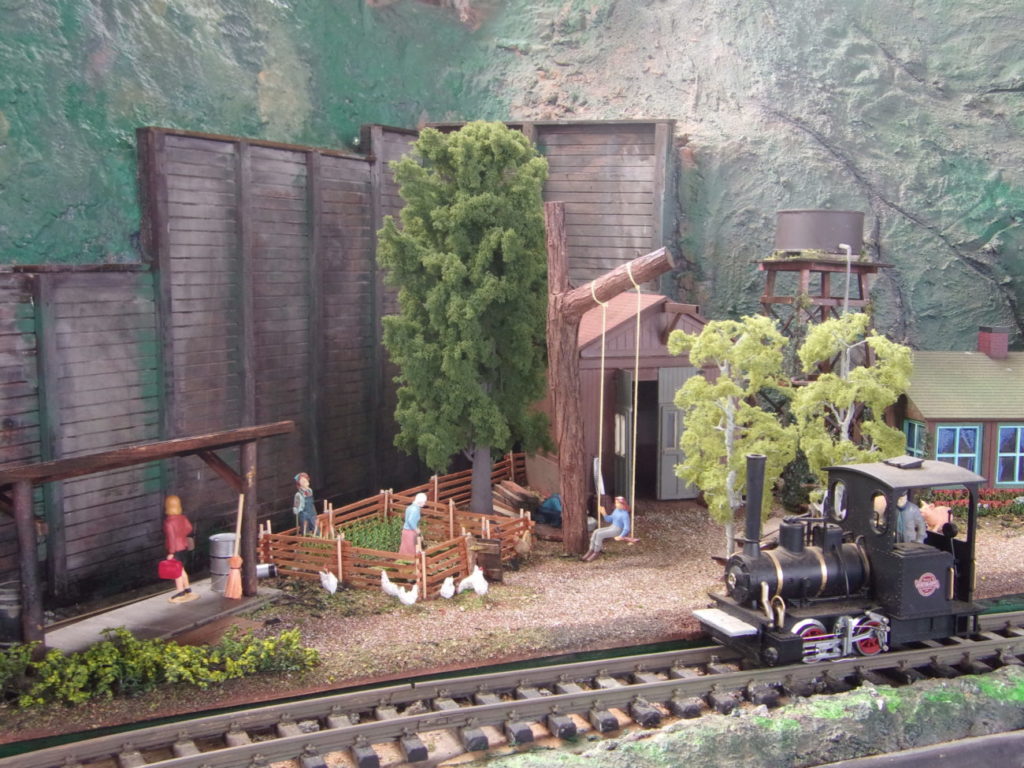 “One over the eight” – an expression meaning  someone who has had one over the eight is very drunk indeed. It refers to the standard eight pints that most people drink and feel is enough. Well, that’s what the dictionary said.

In the mini scene created by our Chief Operating Officer, Frank Davis, the main character looks as if he has definitely had enough. Note the cat to his immediate right who looks as if may also have imbibed when he shouldn’t. Shift your eyes left and you’ll see Bingo the dog who is happy to just sit there. Meanwhile, in the back of the winch house the real work goes on under the supervision of Otto, the foreman.

[Click to enlarge the photo to see all the detail.] 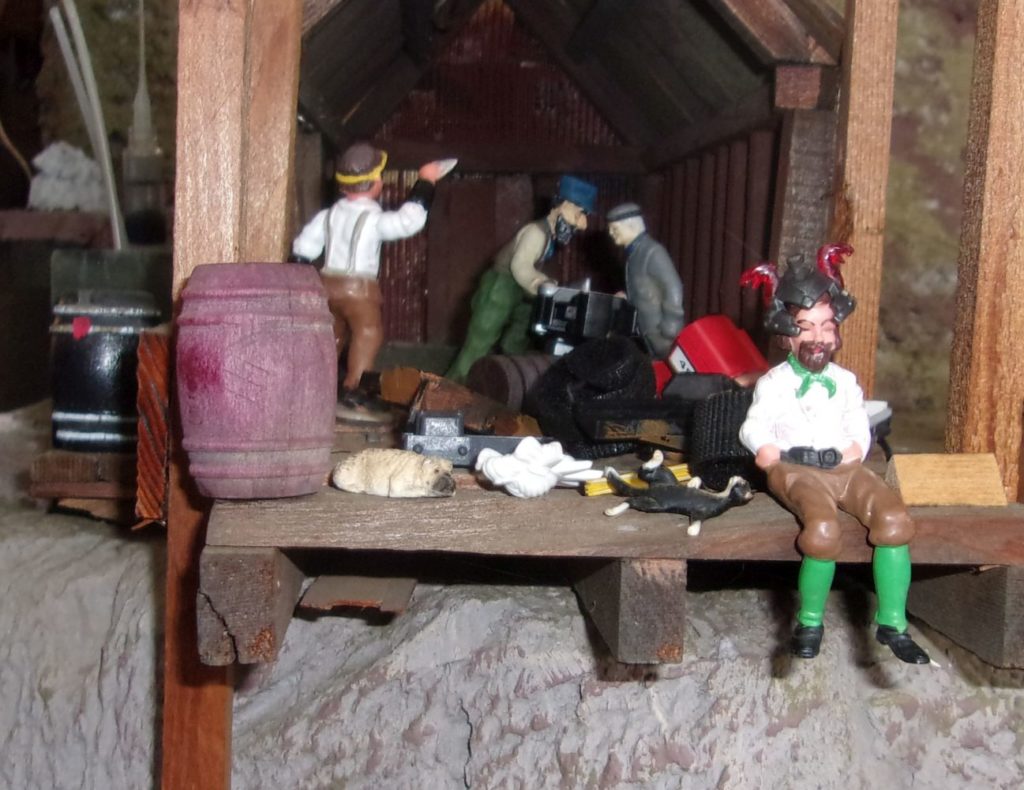 The scene inside the winch house

Normally a tilted track is enough to get logs off the flat cars and into the log pond. Very occasionally a reticent log has to be helped on its way. Here you can see how Frank Davis has created a mini scene showing the last log being helped on its way. [Click on pic to see full size]. 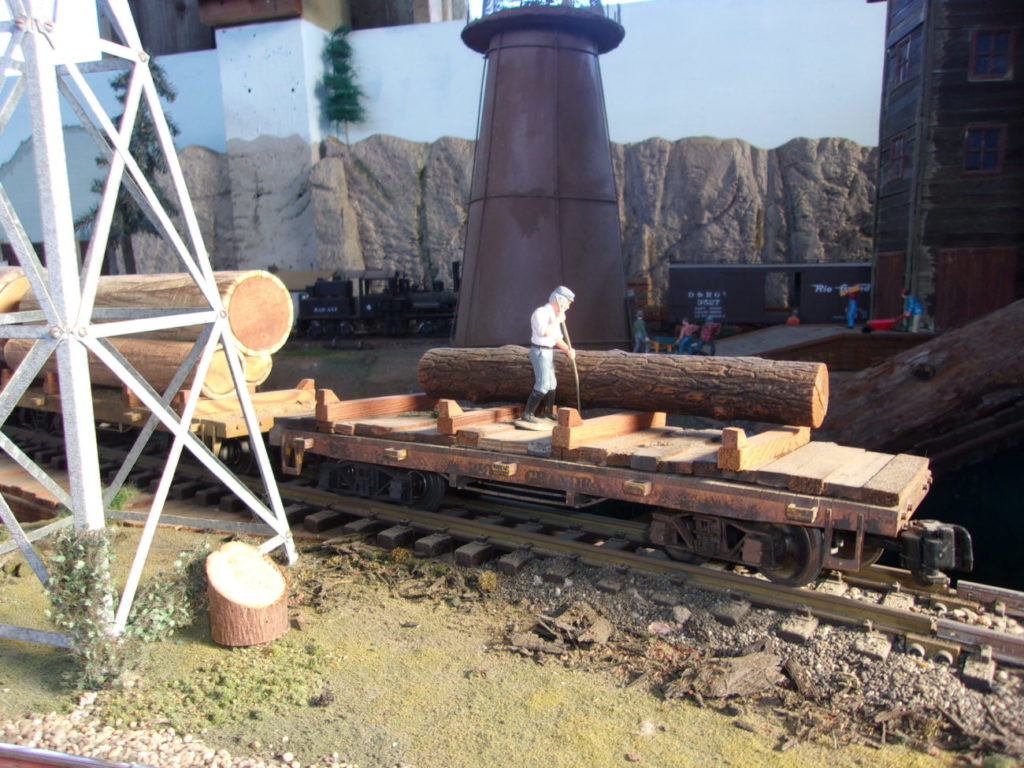 Chuck Whitlock, our club’s president, has been kitbashing Federal truck models that he bottom fished from Ebay. With the assistant of the layout detail maestro Frank Davis one has arrived at the mill and picked up a load of lumber for delivery to a customer. 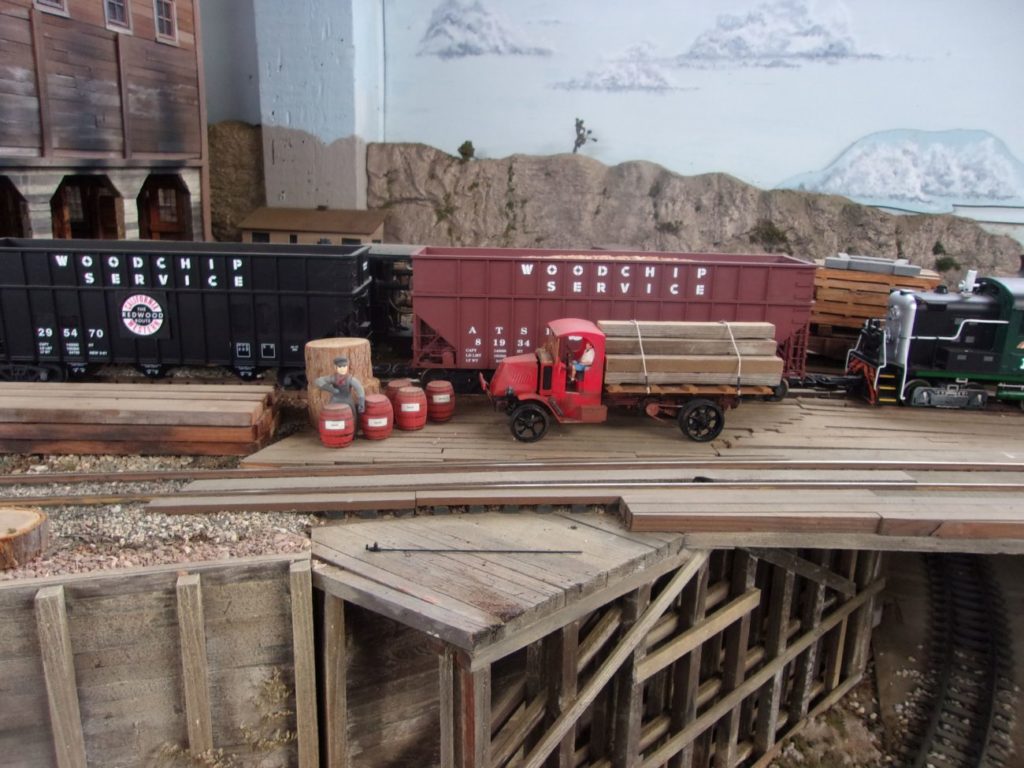 Federal truck picking up load at the mill

I never knew until I started modelling with our club that old time trucks had chain drives. I’ve “blown up” the above pic so’s you can see the chain drive. 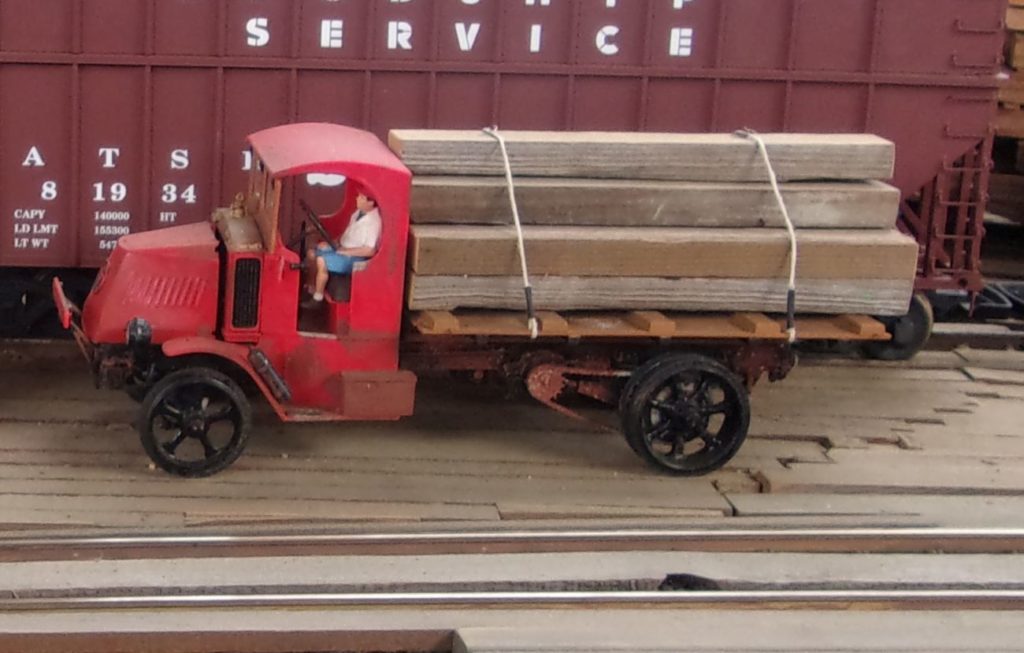 Close up of the Federal Truck showing chain drive

Another bit of mind blowin’ detail on our layout here in Fort Bragg, CA.

This pic shows a tiny bit of the detail on the layout as a result of Chief Operating Officer Frank Davis’s efforts. Interesting the angle for thr shot was pointed out to me by a lady visitor.

Detail from the logging camp