When this diorama was first created it was pretty bare. Unfortunately I don’t have any photos of what was in front of the enginehouse when it was first put in place. However, since it has been in place our King of Detail, Frank Davis has been working assiduously on the detail. Take a look: 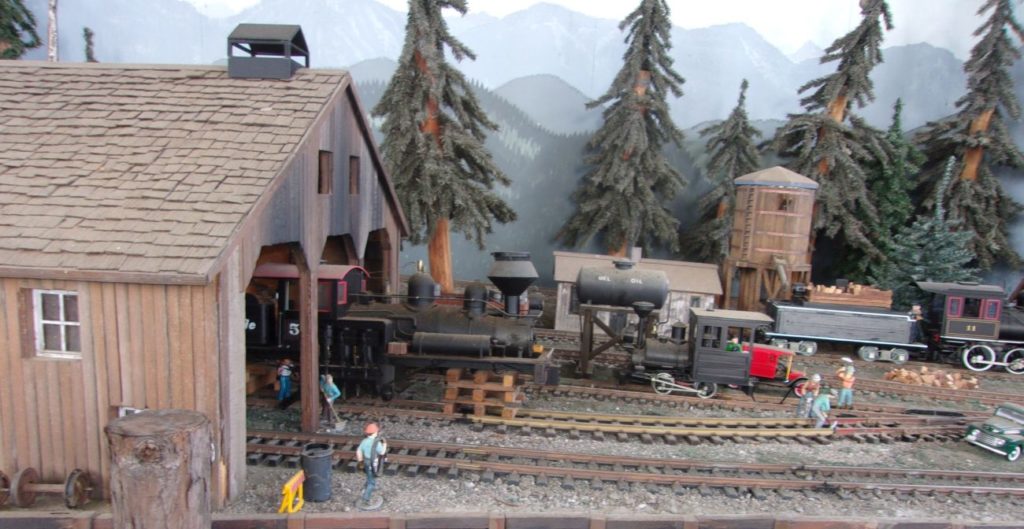 Detail in front of the enginehouse

Whilst it doesn’t show in the photo there is even an arc welder at work on the Shay.

The bottom of the incline is a busy place. Ernestine (a Rogers loco) is waiting to leave. Ernestine is on of the oldest locos that the club (The Mendocino Model Railroad & Navigation Co.) owns. She is a stellar performer and was named after Basil Casabona’s mother. The parked diesel is actually an articulated track cleaner. Alas, the incline has not, as yet, been automated – work for another day. 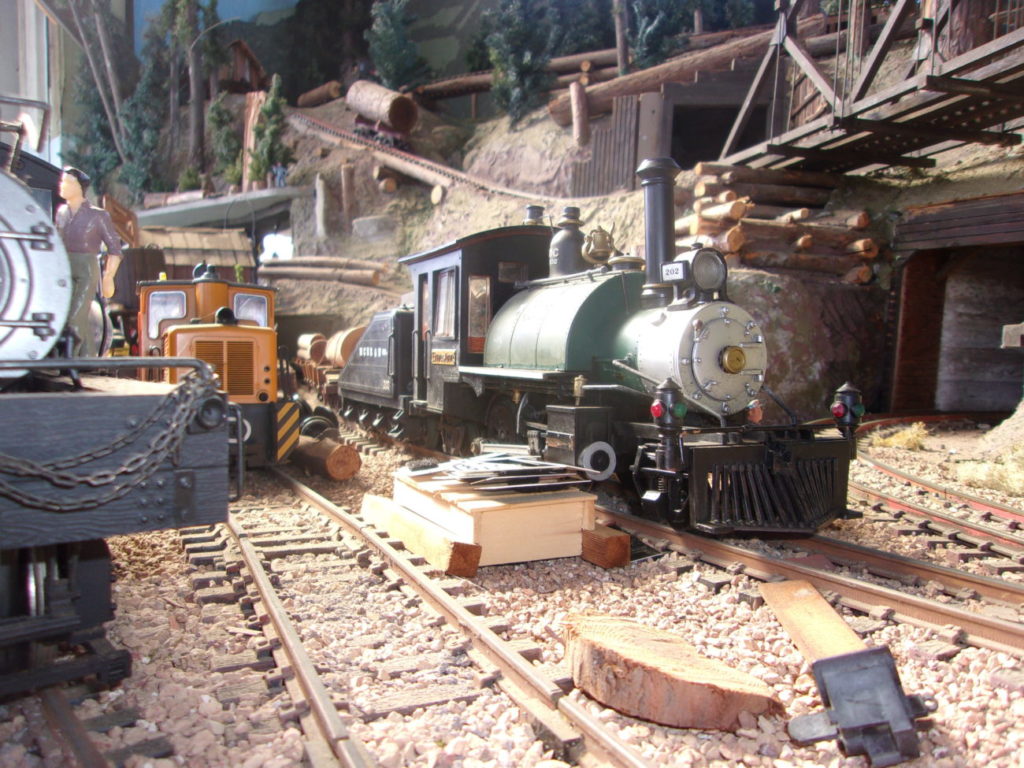 This dioama on the outside east wall is close to the east portal and opposite the Carlson Farm diorama. The diorama was assembled by President Chuck Whitlock. 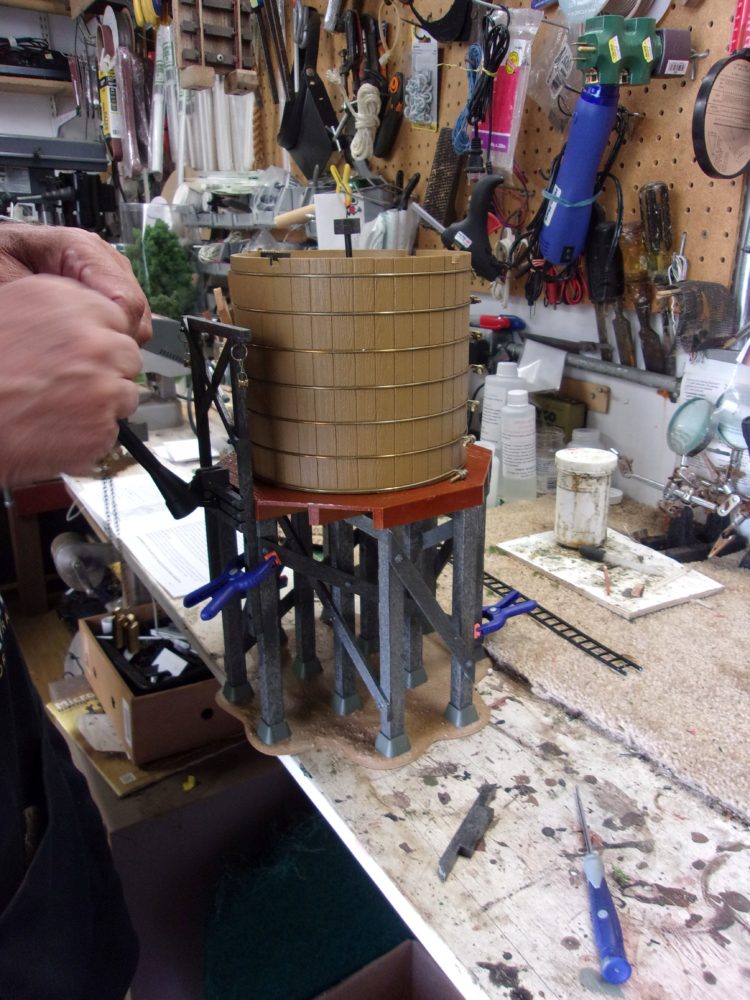 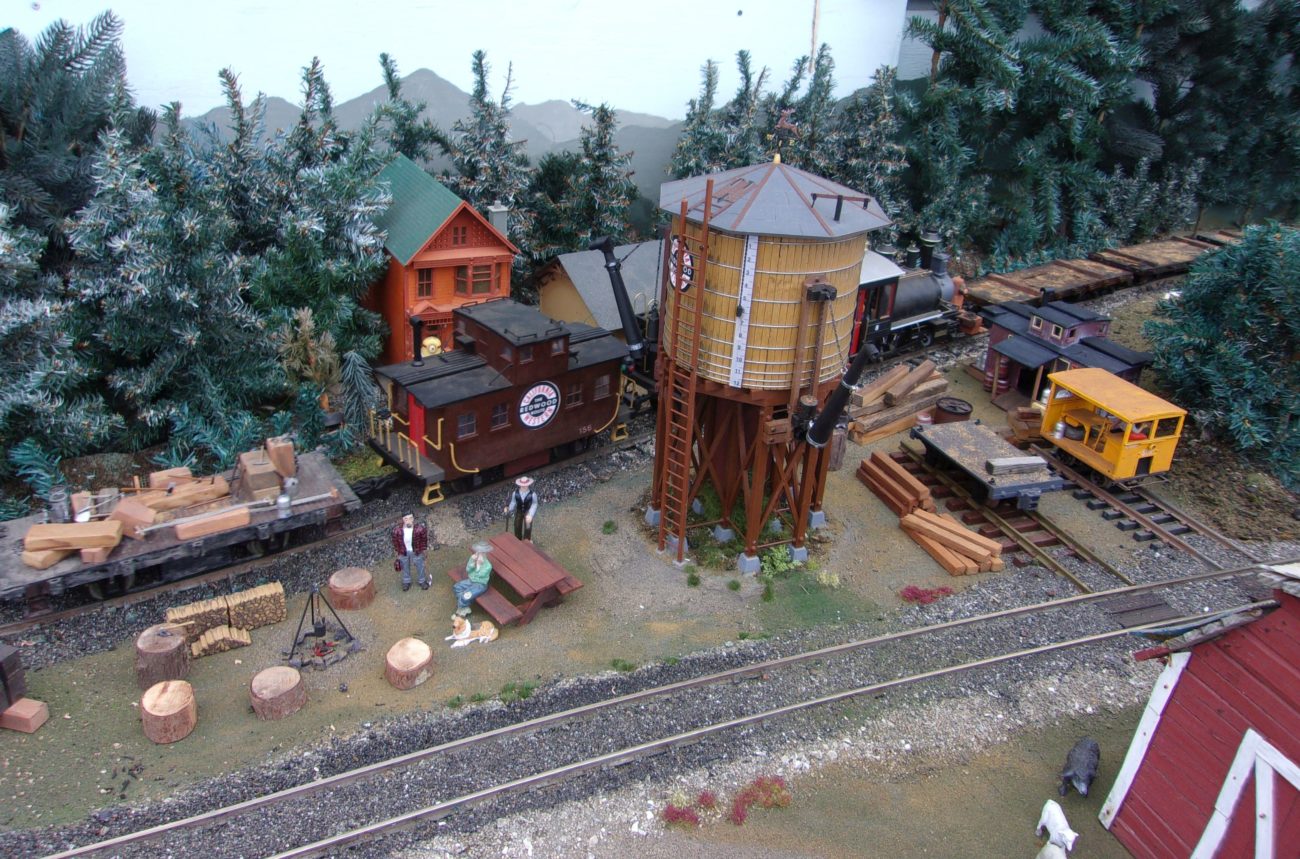 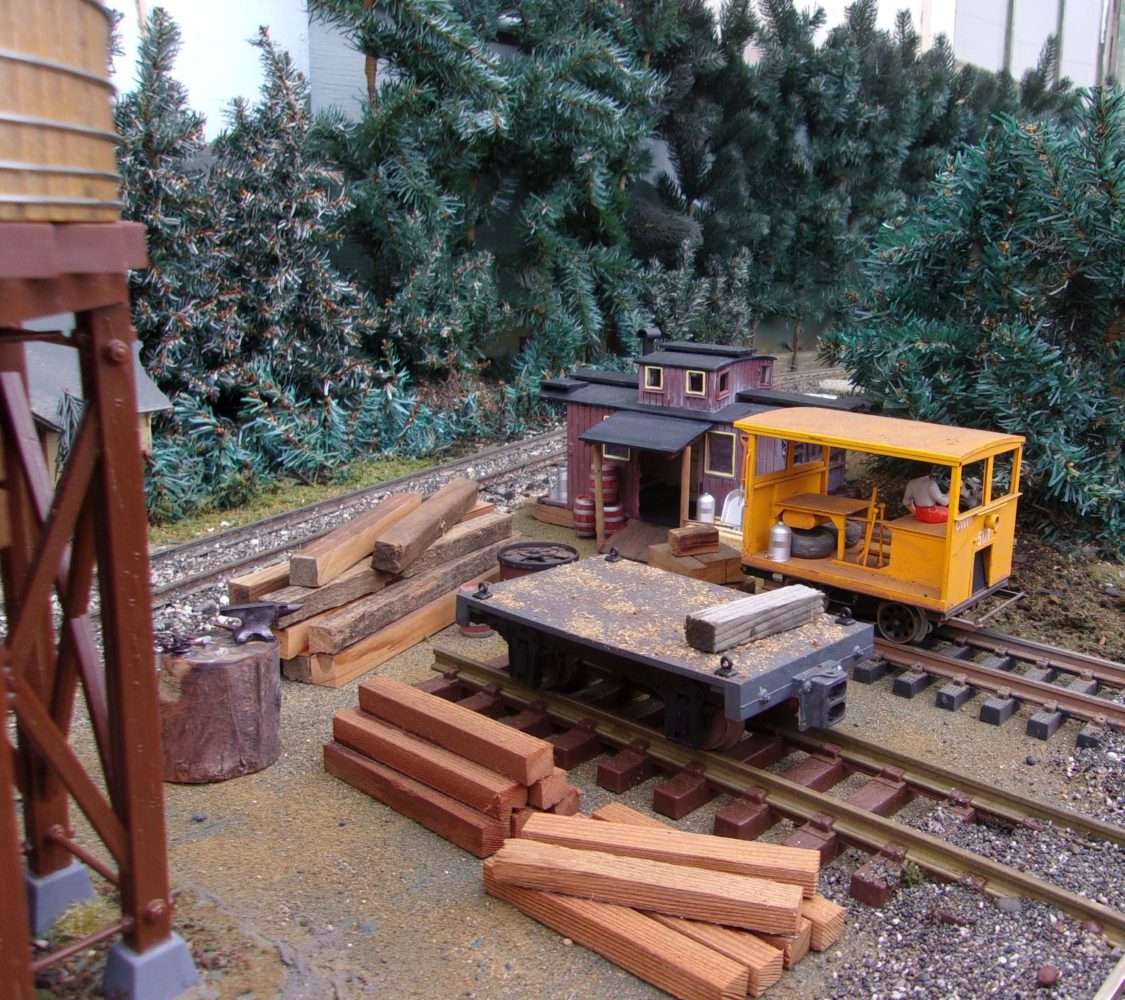 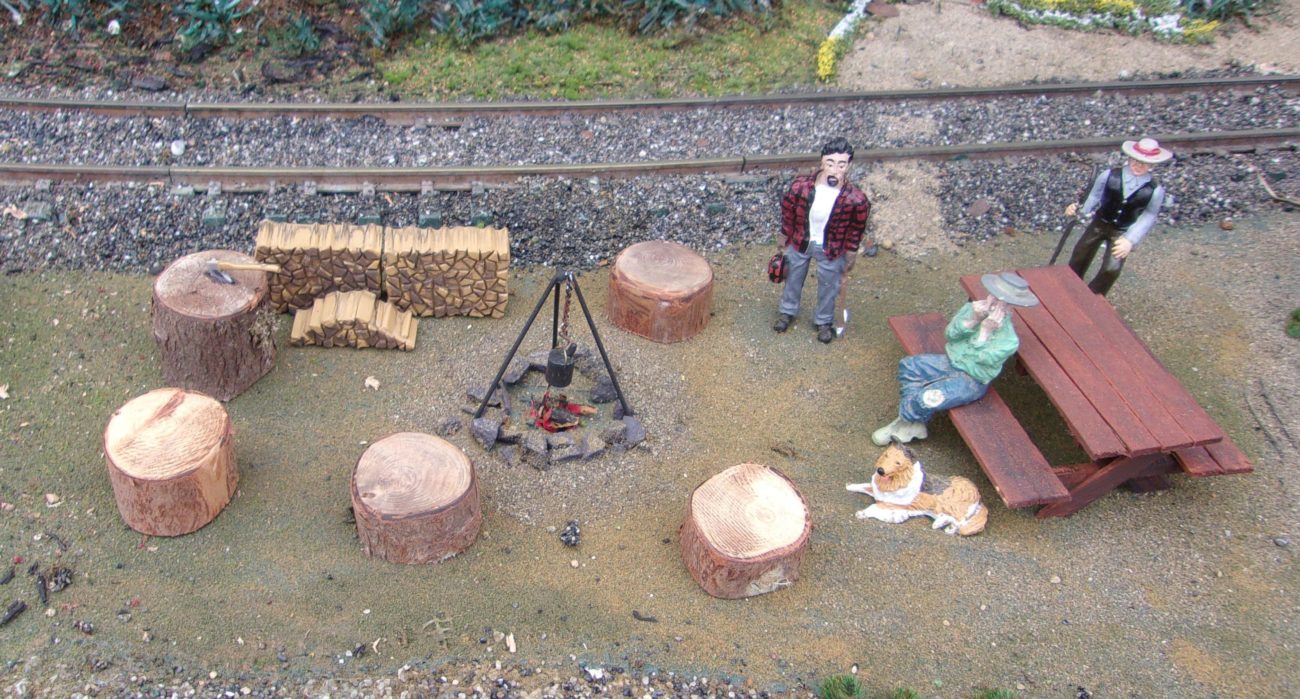 The camp alongside the track

Next to the Pile Driver – see previous post – is the Caspar Lumber Company’s loading area. Here, logs hauled in from where they are cut and loaded onto flat cars for transportation to the Caspar Mill some twenty miles away. Here’s a gallery of action in the loading area. 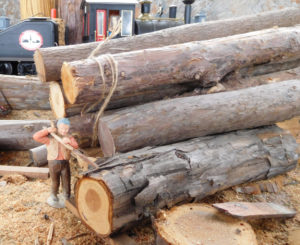 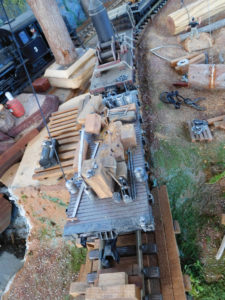 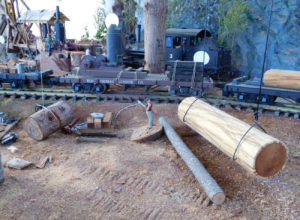 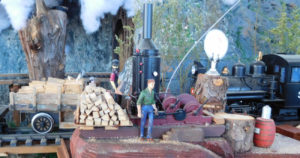 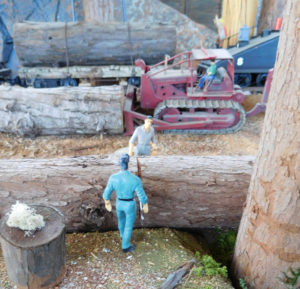 This picture shows the Lineman’s Shack that Chuck Whitlock constructed.  The materials were a door and a window from some other project and “planks” made using a bandsaw.

The outhouse does have a history. It was constructed by me whilst I was incarcerated in Stanford Cancer Clinic. I was bored out of my skull whilst in isolation for six weeks. To keep me from climbing the walls the doctors kindly allowed me to build the “biffy”. I made it all except the toilet holder and the toilet roll. These were made by the head of the Bone Marrow Transplant Unit who followed the construction process with avid interest!!!!!!! The minion? Well they are everywhere on the layout – donated, bought, made with a 3D printer. We do have a sound card for the Minions singing. Alas we do not have a sound card for the Outhouse.

Frank Davis has adapted a locomotive smoke unit to make a static steam donkey look like it is under power. 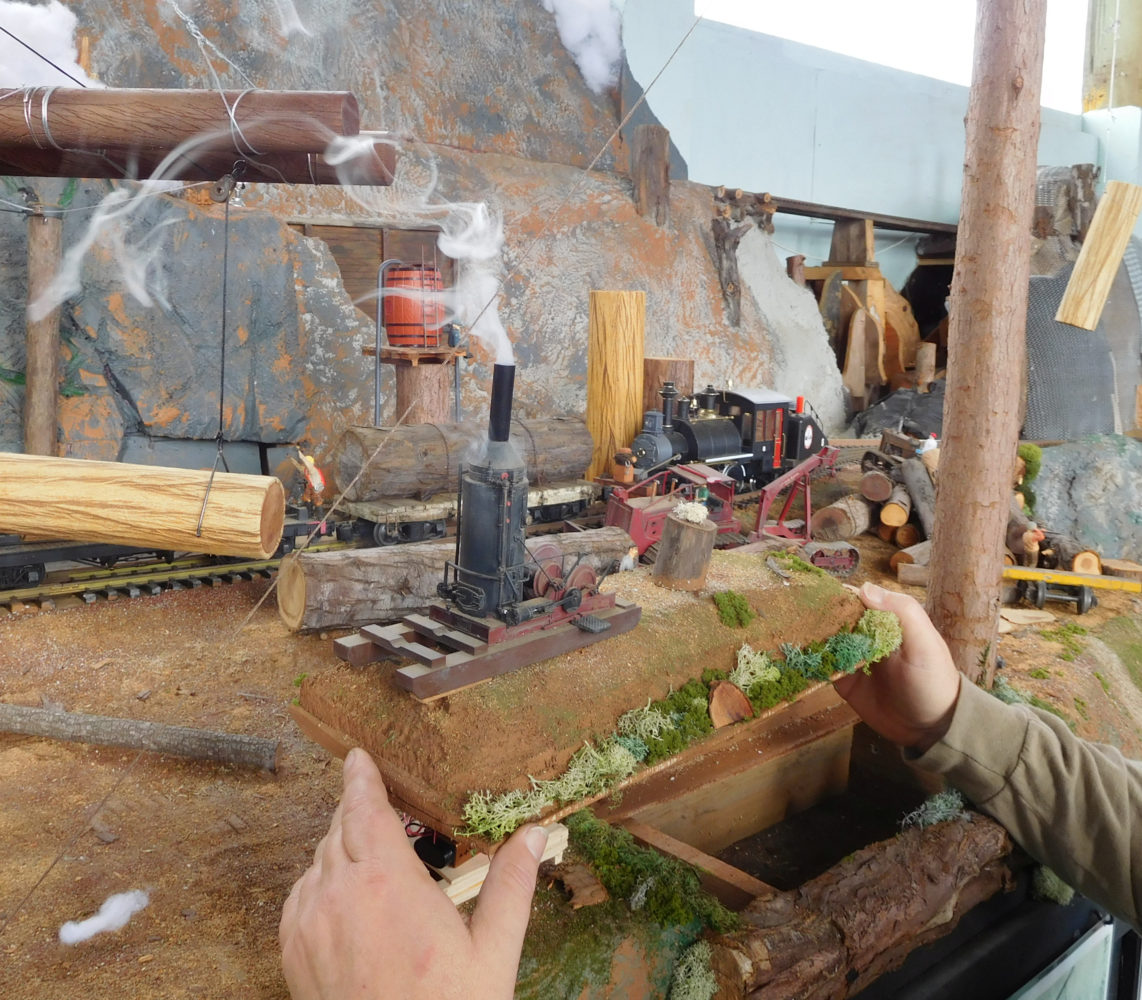